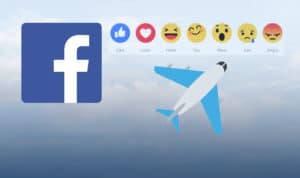 Have you seen people talking about new Facebook plane emoji? Maybe or may not be I am not sure. But, yes there is already big gossip about plane emoji in social media.

Unlike BFF on Facebook, there are already lots of Posts/trolls made about the plane reaction.

Well, this keeps happening in social media. Many of us have not seen an option for plane emoji reaction. Some people already managed to make YouTube tutorials. Lots of screenshots have been posted on Twitter, Reddit, and Facebook.

What is the truth?

Yes, the plane reaction is absolutely truth! Plane emoji was actually created as part of an employee hackathon. But it is not a new feature from Facebook. The plane emoji reaction has fueled tons of wild speculation across the virtual world. Many thought that it is a new feature by Facebook. It is not sure how long it lasts, but you better try before it disappears.

How to get the plane emoji reaction in Facebook?

Once that’s done, you should be able to go to any post, click comment, and find the plane reaction, which is titled “react,” when you hold down the like button. Some have said that a second pissed-off face appears instead and that the plane reaction appears when you click it.

There is scammy plane react post too. People are making fool by posting various hashtag telling users that if they comment on certain pages or like certain posts that they’ll gain access to the plane reaction. We must say that it is not true. But you can try you have nothing to lose :).