Nepal had some natural advantages like Terrian which was one of the crucial factors in determining the course of the war. To the British, who were used to fighting in the plains, but were unacquainted with the terrain of the hills, Nepal’s topography was a huge advantage for Nepalese. In a hill war, the group at higher altitudes always has a natural advantage. Also in the unlikely event of running out of ammunition, they can make use of anything as a projectile or weapon. This later of course turned out to be obviously true as the Gurkhas were able to hold most of the hilltops for much much longer time than the British had anticipated, even with their primitive weapons compared to the British.

The Himalayas on the north and dense forest in the south helped Nepal have the geographical advantage to survive from the Mongol Empire in the north and the British empire in the south. The world was highly dominated by the Mongol empire and the British empire, but the geographical advantage of Nepal saved Nepal from being colonized by both empires.

Nepal has plain land in the south, known as Terai. But at that time, Terai was covered by a highly dense forest full of mosquitoes and many undiscovered wild animals. Anyone willing to venture into Nepal would have to pass through this forest where they would almost surely get bitten by a large number of mosquitoes carrying Malaria and dengue. Many Indian rulers also tried to invade Nepal but failed because of this huge forest which extended far south to Indian states. The mosquito infestation on Terai was so bad that no one used to live in that place. The Terai became habitable only after these mosquitoes infestation was controlled in 1954. On this point, Mosquitoes also helped Nepal to remain one of the non-colonized countries in the world.

3.STRATEGIC MOVE BY NEPAL: THE FRIENDSHIP

Britain or East India Company didn’t colonize India through physical war but it colonized India by playing kings against each other. British played a strategic game and colonized India. However, Nepal was aware of the threats and the plans of the British people beforehand and didn’t fall into their trap. Instead, Nepal established friendly relation with the British India Company to prevent the possible war. Which to some extent helped Nepal to avoid the war from British India. The relationship between Nepal and the British Raj was so good that “Prime-Minister of Nepal, Jung Bahadur Rana was the first  Prime-Minister to get state honors in the court of Queen Victoria in 1850 A.D.He was also the first South Asian head of state to visit Europe.

4.NO STRATEGIC VALUE FOR BRITISHERS

The Britishers in India were mainly after the wealth of India. They were only interested in a trade that would bring wealth to England. The entire geography also makes it extremely difficult to set up any industry on a large scale Nepal was a landlocked country with fewer resources and manpower, So it was not in the eye of the British.

5.BUFFER ZONE BETWEEN INDIA AND CHINA

Nepal lies between India and China. The two prevalent empires back then were Mongol and British Empires. The Britishers did not want to agitate the Chinese. When the British got to eastern parts of then Nepal such as Sikkim the Chinese army had already formed a camp at the northern frontier of Nepal. A war with the Chinese would be more expensive for the British. Nepal was the safe boundary for the British from the Mongol empire. The Annexation of Nepal would have inadvertently brought them in close confrontation with the Mongol/Qing Empire, which they tried to avoid at all cost.

The war was already getting expensive for the British. This was a time when the East India Company was getting criticized back home for the amount it was spending. Also, the British had to pay a heavy price for the war with Nepal. They fought two wars with Nepalese and lost the first war as they underestimated the power of Nepal. The next war is also known as the Anglo Nepal war that started in 1814 and ended in 1816. The Anglo Nepal war cost a lot of money for the British. So, Instead of getting involved in a war with them, which was getting expensive, the British wanted to recruit the Nepalese soldiers. This meant a cheap army for them. 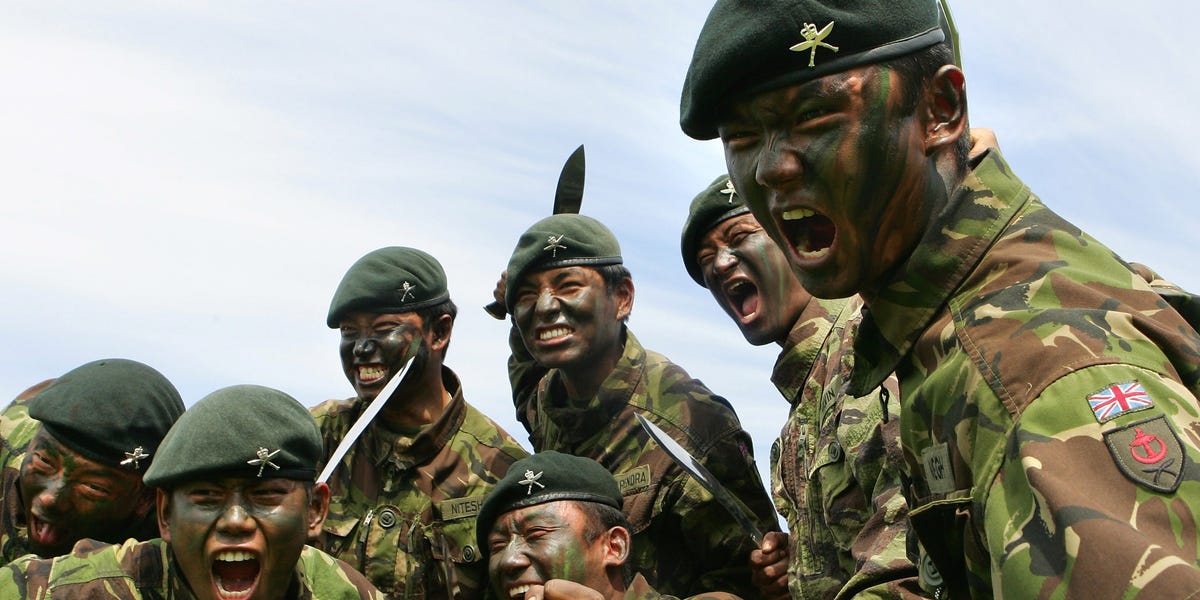 Last but not the least, The bravery of the Gurkha army was also one of the reasons that Nepal was never colonized by the British. Initially, the British underestimated Nepal and paid a heavy price. The war between the British and Nepali occurred in two phases known as the First Campaign and the Second Campaign.

The Nepalese won a resounding victory over the British at the end of the first campaign as the British had seriously underestimated the Gurkha’s military capabilities, and due to topography and the illness of British Soldiers.

For the second campaign, the British came prepared with their advanced military equipment and outnumbered Gurkha Soldiers. However, British Soldiers fought bravely which impressed the Britishers. Despite, Nepal lost the war, they earned respect from the British.

What is your view on this topic? Comment down below :

We use cookies on our website to give you the most relevant experience by remembering your preferences and repeat visits. By clicking “Accept All”, you consent to the use of ALL the cookies. However, you may visit "Cookie Settings" to provide a controlled consent.
Cookie SettingsAccept All
Manage consent

This website uses cookies to improve your experience while you navigate through the website. Out of these, the cookies that are categorized as necessary are stored on your browser as they are essential for the working of basic functionalities of the website. We also use third-party cookies that help us analyze and understand how you use this website. These cookies will be stored in your browser only with your consent. You also have the option to opt-out of these cookies. But opting out of some of these cookies may affect your browsing experience.
Necessary Always Enabled
Necessary cookies are absolutely essential for the website to function properly. These cookies ensure basic functionalities and security features of the website, anonymously.
Functional
Functional cookies help to perform certain functionalities like sharing the content of the website on social media platforms, collect feedbacks, and other third-party features.
Performance
Performance cookies are used to understand and analyze the key performance indexes of the website which helps in delivering a better user experience for the visitors.
Analytics
Analytical cookies are used to understand how visitors interact with the website. These cookies help provide information on metrics the number of visitors, bounce rate, traffic source, etc.
Advertisement
Advertisement cookies are used to provide visitors with relevant ads and marketing campaigns. These cookies track visitors across websites and collect information to provide customized ads.
Others
Other uncategorized cookies are those that are being analyzed and have not been classified into a category as yet.
SAVE & ACCEPT
Loading Comments...
%d bloggers like this: